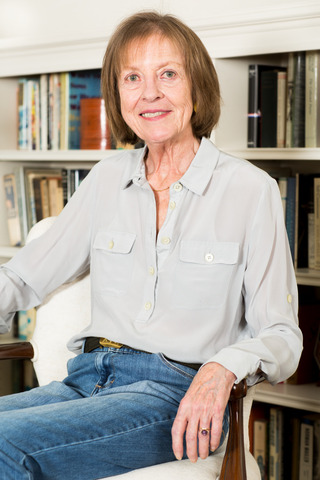 Frances FitzGerald is a journalist and author. She has written six books and contributed to The New Yorker, the New York Review of Books, Harper’s, The Atlantic, The New York Times magazine, Esquire, Architectural Digest and other publications.

Her first book, Fire in the Lake: the Vietnamese and the Americans in Vietnam (1972) received the Pulitzer Prize, the National Book Award, and the Bancroft Prize for history. “If Americans read only one book to understand what we have done to the Vietnamese and to ourselves, let it be this one,” wrote historian Arthur M. Schlesinger, Jr.

Her second book, America Revised: History School Books in Twentieth Century (1979) traces the changes in the textbook interpretations of American history and the politics of textbook publishing. C. Van Woodword in in the NYRB wrote: “Her major contribution has been to shed light on the reasons why generation after generation have been deprived…of any real sense of history, or the place of their country in history…” The New Yorker ran three excerpts of the book.

In a 1979 People magazine article, William Shawn, The New Yorker editor said, “Right now she’s one of the best non-fiction writers of her generation.” Robert Silvers, editor of The New York Review of Books, added: “She’s a master of complicated ideas and difficult issues in her factual pieces. She pursues research to an inhuman degree. She is tireless and thorough.”

FitzGerald’s third book, Cities on a Hill: A Journey Through Contemporary Cultures (1986) looks at four modern Utopian experiments: the gay community in San Francisco’s Castro district; the fundamentalist community of Jerry Falwell, the pastor who founded the Moral Majority; the Sun City retirement community near Tampa, Florida; and the free love commune of the Indian guru, Bhagwan Shree Rajneesh, in Oregon. All were published in The New Yorker, and the book won the award for literature from The English-Speaking Union.

Her fourth book, Way Out There in the Blue: Reagan, Star Wars and the End of the Cold War (2000) won the Los Angeles Times award for non-fiction and was selected as one of the New York Times ten best books of the year. It was a runner-up for the Pulitzer Prize, the National Book Award and the Frances Parkman prize for history.

Vietnam: Spirits of the Earth (2001) was the result of a collaboration between FitzGerald and the photographer, Mary Cross, who revisited Vietnam together in 1999 to create a vivid look at contemporary post-war Vietnam. They show the revival of traditional culture in north and central Vietnam, the progress of the economy and then tensions within Vietnamese society.

FitzGerald serves on the boards of directors of the Alicia Patterson Foundation, theNation and the Citizens Committee for New York City. She was president of the PEN American Center and The Society of American Historians and served on the board of the Rockefeller Foundation and the Harvard Board of Overseers. She is a member of the Council on Foreign Relations.

FitzGerald is married to the journalist and author, Jim Sterba, and lives in New York City.